There's a new release out! It's a scifi time travel romance called The Sojourner! it's on sale at Amazon for $2.99! 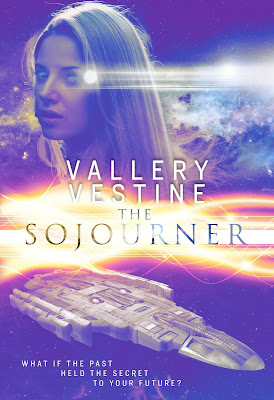 All her life Sara McGregor has felt adrift, searching for. . . something. Part of her past is shrouded in mystery, thanks to her enigmatic mother, long dead, and she's struggling to figure out what course her life should take. Dropping out of college and a string of failed relationships has trapped her into a holding pattern. There's got to be something more than her dead-end job, her current loser boyfriend and the pointless rat race of life. Something is missing.
A strange astronomical event coupled with the power of a family heirloom blasts her into the future, far away from her world and from everyone she's ever known and loved. She accidentally lands on the ship of a handsome pirate captain. Viewed as an unwelcome stowaway at the least, a dangerous spy sent to harm the crew at the worst, the captain is convinced that she's been sent to assassinate someone very close to him. Sara's in over her head and must think fast to convince the captain she's innocent. Sara's game for the excitement but does she have what it takes to survive among a den of space pirates who don't trust her? Survival among them depends on the captain accepting her account of how she landed on his ship and discovering her identity. The answer lies in the mystery surrounding her secretive mother, an answer that may save her life and help her chart a new destiny.
Posted by V.A. Jeffrey at 8:19 PM No comments:

Email ThisBlogThis!Share to TwitterShare to FacebookShare to Pinterest
Newer Posts Older Posts Home
Subscribe to: Posts (Atom)
blueshift fiction is a way-station to places strange and wonderful, unknown and infinite. Sojourners come, take your ease while you look with starry eyes toward the marvelous way that awaits.